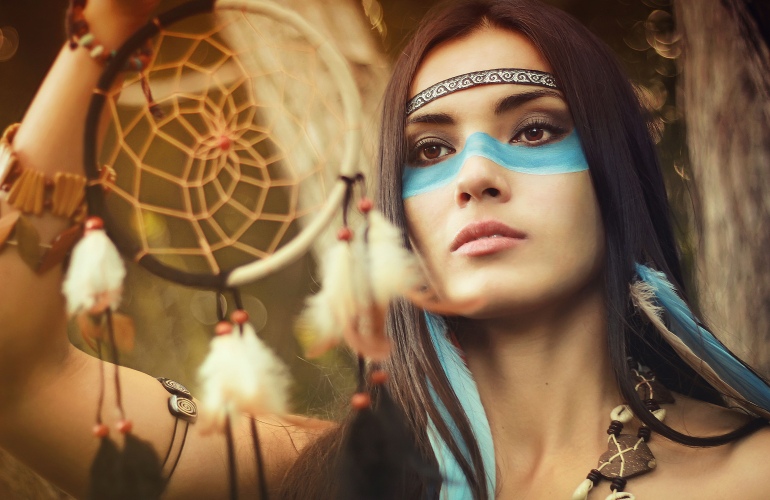 “Cowboys and Indians” was the earliest game I remember playing in my neighborhood. I always wanted to be the ingenious Indigenous, powerful and stealthy from knowing the place, strong and tan from living off the land. I didn’t understand why most kids wanted to play the boring interloper cowboy, but it worked for me.

Behind the scenes, I didn’t just want to play the role, I wanted to be an American Indian. The way my four-year-old self saw it, there was only one thing keeping me from sleeping in a teepee and hunting game on horseback with my new peeps: golden blonde hair. I knew from every TV show I’d seen that there was no such thing as a blonde American Indian.

Nightly, I would pray to the Guy in the Sky to give me long, straight black hair. I pictured myself at the top of a clay mountain on horseback, the sun high overhead, waving goodbye to my family as I prepared to gallop away. A shirtless brave with equally awesome long black hair was on his own horse beside me. We set off for my new home, our matching hair waving majestically in the wind behind us, along with some feathers from our headbands.

As I grew older, I came to understand that I would not be fishing in cold, clear streams with my fellow tribesman and sleeping under buffalo skins. I never lost my soft spot for the Indigenous people, their culture and traditions, though. The more I learned, the more I believed I’d been on the right side of that childhood game. So in my 30s, when the consulting firm I worked for landed a contract essentially helping the attorneys for the “cowboys”, I was horrified. I decided to decline being staffed on the project, even if it meant giving up my job. Fortunately I wasn’t staffed on the engagement, so it never came to that.

A few years later, now at another consulting firm, I learned of a project working to reconstruct the records of Indigenous tribes in an effort to get their assets appropriately assigned. I was thrilled at the chance to right some past wrongs. Alas, the job involved a lot of on-site time at remote reservations and came with a hazmat suit, and I was pregnant. Contributing in that way would have meant a lot to me, but the time wasn’t right.

Over the course of my career I haven’t always felt passionate about the projects I undertake or refuse. I was reminded of these two engagements, though, when I read about an increase in employees making working decisions based on the values and social positions of their current or potential employers. The importance of Corporate Social Responsibility has been increasing in recent years, but the pandemic seems to have accelerated employees prioritizing it from their employers.

I wonder how it will shape assignments and engagement choices in the future. I suspect it would be much easier to decline an assignment that clashes with your values, without having to accompany it by a resignation. I feel comforted knowing that as businesses evolve there will be more of a place for our social conscience, and more opportunities for employees to do work that touches their hearts.

6 thoughts on “Following our passions is getting easier.”